About the Mammoth Hospital Auxiliary

The Cast Off & The Auxiliary’s Philanthropic Work 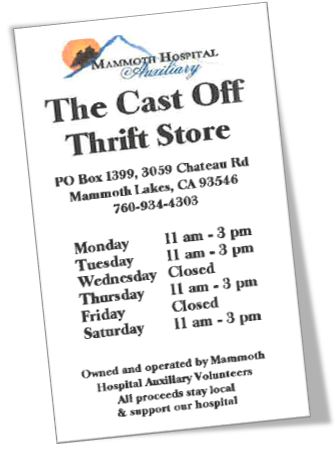 The Auxiliary also supports the Hospital through the Hospital Service Program which provides volunteers, occasional transportation, and housing to patients and their families.  They host annual blood drive and assist with health outreach in the community.  And last but not least, The Cast Off provides a key service to many local residents, helping them furnish their households and purchase clothing they could not afford to buy otherwise.

There’s no doubt among Mammoth locals that The Cast Off, the Mammoth Hospital Auxiliary, and all its dedicated volunteers are town jewels!

In addition, the Auxiliary is working towards another $87,000+ donation to the Mammoth Hospital Foundation to support the purchase of a Tomosynthesis machine.  This machine is the most cutting-edge new resource in the battle against breast cancer, transforming digital mammograms from 2D to 3D images, enabling detection at an earlier stage and increasing the likelihood of effective intervention.  In addition to the initial $87,000, the Auxiliary is directly donating all earnings from “Think Pink” Saturday sales toward the purchase of the $350,000 machine. Thanks to the hard work of the Auxiliary and its volunteers, Mammoth Hospital will be able to bring this life-saving resource to women and families throughout the Eastern Sierras!