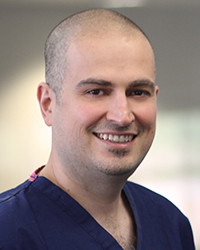 American Board of Medical Specialties of Surgery

Dr. Bahiraei is board certified in general surgery and moved to Mammoth Lakes in 2013. Prior to Mammoth Hospital, Dr. Bahiraei practiced at Whidbey General Hospital in Coupeville, Washington. At Whidbey he provided general surgical, vascular, thoracic, trauma, and endoscopic services. He received his bachelor’s degree in neuroscience from Tulane University in New Orleans, and his medical degree at the University of Alabama School of Medicine, in Birmingham, going on to complete his residency at Virginia Mason Medical Center in Seattle.

Grateful patient, Mike Lee tells his story of how Dr. Bahiraei saved his life after a snowboarding accident.