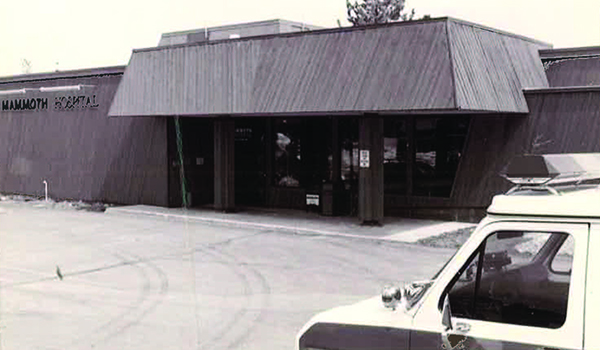 The idea for Mammoth Hospital was put into motion in 1978 by a group of local Mammoth residents who, due to the growing population of the town, took it upon themselves to raise money for a hospital in Mammoth Lakes.

The group who called themselves the Mammoth Hospital Auxiliary, set out to heighten awareness, raise money, and pass a bond measure to build the 20,000 square-foot hospital needed to support the expanding community.

Eventually, the $2 million bill was passed and Mammoth Hospital was born. After six years of operation, the hospital was adopted by Centinela Hospital in Ingelwood, California.

Centinela hoped to expand their excellent sports medicine program and become a leader in the treatment of winter sports injuries but the logistics of managing a small hospital in the remote Eastern Sierra were tougher than any anticipated.

Centinela’s leadership lost interest in the outreach parenting strategy and in 1994 gladly handed the hospital back to the Healthcare District at the end of their 10-year lease.

With only a 15% market share for inpatient hospital admissions in Mono County, Centinela predicted Mammoth Hospital would go under in just a few years.

Centinela Would Later be Proven Wrong

This expansion was funded in large part by bonds passed by the community in 2001.

In 2018 Mammoth Hospital is now a vibrant institution celebrating its 40th year anniversary. The hospital now stands as a tribute to what a small community can attain in quality health care service through sound local guidance.

Mammoth Hospital today is proud to have a driven, unified team of professionals and staff dedicated to providing quality health care today and well into the future.