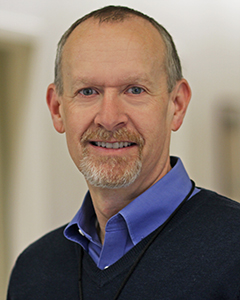 Tom Parker joined the Mammoth Hospital team as Chief Executive Officer in December, 2018. Tom’s career in healthcare spans much of his life—he started working in hospitals when he was 16 as a surgical orderly. Following graduate school, he worked for Legacy Health System in Oregon for 14 years, holding positions from Administrative Associate to Administrator of Legacy at Mount Hood Medical Center in Gresham, Oregon. Before he took over at Mammoth Hospital, Tom spent eight years at Snoqualmie Valley Hospital in Snoqualmie, Washington, where he served as Chief Operating Officer and CEO.

Moving to Mammoth Lakes rekindled Tom’s love of skiing, and he and his wife Kristen have enjoyed skiing together at Mammoth and June Mountains. Tom has also gotten to know the highways of the Sierra on his motorcycle, a Harley-Davidson Street Glide. He and Kristen are both active in their church and serve in the local congregation and in the community.

Tom serves on the Board of Disabled Sports Eastern Sierra as well as the Mammoth Lakes Chamber of Commerce. He also has been organizing the Mammoth Rocks Motorcycle Rally since 2020.

To Tom and Kristen, family is everything, and living in Mammoth Lakes has allowed them to be closer to their family and to be able to share with them the beauty of the Eastern Sierra.