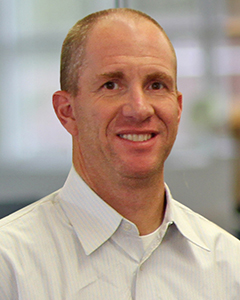 Dr. Burrows grew up in Syracuse, New York and went on to study at Hamilton College. He went on to complete his Medical Degree at State University of New York Health Science Center at Syracuse. He completed an internship and residency at Deaconess Hospital in Boston, Massachusetts, and was then on to the west coast where he completed a fellowship in Pulmonary and Critical Care Medicine at University of California at San Diego Medical Center.

Dr. Burrows lived in San Diego for 16 years prior to moving to Mammoth, and had been coming to the Eastern Sierras to vacation with his family throughout his time living in Southern California. He had always dreamed of making the move to Mammoth full time and when he saw an opening at Mammoth Hospital for his current position decided it was time to turn the dream into reality.

Dr. Burrows is an avid sports fan when it comes to following college sports – especially Syracuse, claiming he “bleeds orange.” He feels incredibly lucky to be living in Mammoth and loves all the Eastern Sierra has to offer. In his spare time Dr. Burrows enjoys running, snowboarding, hiking, golf, and hanging out with his wife and three kids ages 9, 11, and 18.