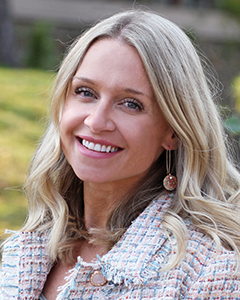 The majority of Caitlin’s career was spent in Medical Surgical and ICU, although she was cross-trained in other areas of the hospital. Prior to accepting her role as CNO, she worked as the manager of Med/Surg and ICU and piloted the newly designated Covid- 19 ward during the beginning of the pandemic. Caitlin is well-versed in quality matters and has lead and participated in many project improvement plans throughout the hospital during her seven years of employment.

The highlight of her career was achieving the Daisy award for extraordinary nursing in 2014. She chose a career in nursing because she is passionate about treating and caring for people. Ever since she was young, she knew that it was on her heart to help and heal. Nursing has given her that opportunity. Patient and staff advocacy is her passion, and being in leadership has given her the ability to influence these matters from the top down.

Caitlin was born and raised in Mammoth. Although she left after high school to pursue her education, the mountains called her home shortly after her graduation from nursing school. Some of her hobbies include golfing, crossword puzzles, shooting, baking and hiking. Outside of work you will likely see her with her 5-year-old son (Caitlin says is her greatest accomplishment) exploring the great Eastern Sierras.